The track “Going for the BigBeat” (Composer/Producer: Frank Herrlinger) was used in a corporate video for Microsoft (Belgium&Luxemburg) produced by Ebuco Digital Productions (Belgium). The music bears up the video with a jazzy track dressed in a big beat robe.  A sweet little whistled theme takes place and keeps the track easy and relaxed.

For a short making off “Bored to Death” (HBO) The Hollywood Reporter (THR.com) licensed music from the Proud Music Library. They decided to take the track “Who’s that man” by Frank Herrlinger (Composer/Producer).

Watch the “Making of”… 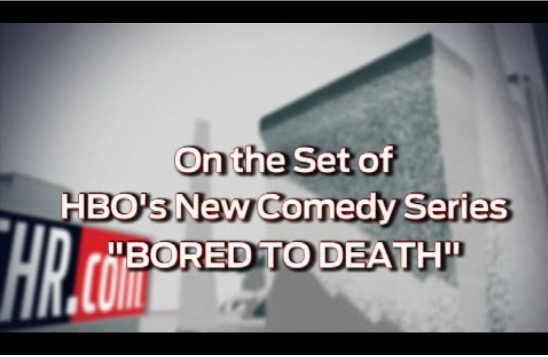 The track “Elicottero” (Composer: Marianna Cataldi) was licensed for a video about the medal races of the 470 Class World Championships 2009 .  This is a World Championship in the Olympic sailing sport, with athletes who will appear at the start in London 2012.

The track “Watching actors on stage” (Producer/Composer: Frank Herrlinger) from the Proud Music Library was licensed for the NINTENDO WII TV Spot.  The track is a “Ragtime”. Ragtime is an original musical genre which enjoyed its peak popularity in the early decades of the last century.  It was a modification of the march, with additional polyrhythms coming from African music. Ragtime music was often used in slapstick scenes in the silent movie age. The music is suitable to boost up chases, cake fights and further funny scenes in “the flicks” of Buster Keaton, Charlie Chaplin or Harold Lloyd.

The Ragtime had his ultimate peak in the early 1970ies in the movie “The Sting” of ´George Roy Hill.  A lot of rag time compositions by Scott Joplin were used in this film (e.g. “The Entertainer”) and made this music genre world famous. This music genre is perfect for a background music of active and hectic situations in a scene. This music, with its syncopated melodies, acts as a stimulant and makes the scene happy, cheery and frolic.

GM Productions licensed the royalty free track “Ways Var. 1” for the trailer “Chaz Sands Invitational 2010 Highlights” from the Proud Music Library (Producer/Composer: Alexander Talmon). This track builds up a contineous tention, dressed in a orchestral robe, highlighted with pulsating electronic sequences. In alignment to this,the cutter of this film chose his scenic structure. Particularly the electronic accentuations of the track are skillfully reflected in the film. This trailer shows how music could be a perfect help to cut a film intuitively.

The Android 2.2 (FroYo) update for HTC Desire has started rolling out. You can now search, find and listen to the titles on our Proud Music Library Website on your HTC smartphone! The FroYo update for the HTC Desire includes the complete set of Android 2.2 features and contains a few special additions as well.